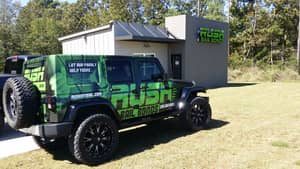 Take a deep breath.  It’s going to be okay.  Getting arrested or having a loved one locked up behind bars is terrifying.  We know what you’re going through and we know how to make it better.  When you call a Rush Bail Bonds agent in Centre, AL, you’re getting the best in the business.

And that means you or your loved one will get out of jail and on with life as soon as possible.  It’s going to be okay. A Rush bail bond agent is standing by ready to take your call today at (256) 286-1075!

After your daughter has been arrested, she will be taken directly to the Cherokee County Jail.  If you have yet to hear from her, you can always log onto the jail website: www.cherokeecountyalsheriff.com to see her booking photo, jail status and bond amount.  Once your daughter is at the jail, she will be officially booked into jail.  This process can take anywhere from a a few minutes to a few hours.

No case is the same.  During booking, she will have her picture and fingerprints taken. Jail staff will also do a full body search and she will hand over any personal belongings.  A medical exam will also take place to best accommodate any special needs she may have.  Depending on the charge against your daughter and criminal history, she may be released shortly after she’s arrested.

But, if she’s accused of a serious or violent crime, she will be escorted to a jail cell where she will wait to make a first court appearance in front of a judge.  Once you learn of your daughter’s arrest, we advise you call an experienced and licensed bail bond agent right away.  Our agents are conveniently located in Centre, AL to make it easier to get you or your loved one out of jail!

Finding Out The Bail Amount

However, if she’s charged with a felony such as assault or murder, she will not enter a plea. With the help of her attorney, she will have a chance to enter a plea at another hearing. Based on your daughter’s criminal history, current charges and employment status, a judge will then determine her bail amount.  Bail is basically an insurance policy with the court to make sure your daughter shows up to future court hearings.

Let Our Family Help Yours!

It’s not as complicated or expensive as it may seem.  You have a couple options.  You can pay cash for the total bail amount or you can work with a professional bail bond agent. When you work with a bail bond agent, you only pay 10%-15% of bail.  For example, if a judge sets your daughter’s bail at $1,000, you would only need to pay $100-$150 when you work with Bail Agents.   We’ll also need a co-signer and some form of collateral. We accept all forms of collateral: jewelry, property, boats and cars.

Why do you need collateral? It’s simple.  If your daughter skips her court hearings, then Rush Bail Bonds is responsible for the total bail amount of $1,000.  If this happens, then a bail bondsman agent in Centre will need a way to pay for the bill. This is where the collateral comes in. For example, if you signed over a boat as collateral in this case, we will sell the boat to pay for bail.  We sincerely hope it never reaches this point.

Our bail bond agents want to make this process as easy and stress-free as possible. When your daughter is released from jail, it is crucial you and her know the date of her next hearing.  If you’re feeling overwhelmed, call a Rush bail bond agent anytime of the day.  Our trusted and experienced agents, can help you stay on track!

With more than 15 years of experience across the great state of Alabama, we know what it takes to get your daughter out of jail and on with her life.  We love this community and have a deep passion for helping our neighbors.  There is never a good time or place to be arrested.  This is why we have agents in Centre, Birmingham and Columbiana ready to take your call 24/7.  We here for you. Call us at (256) 286-1075 today!